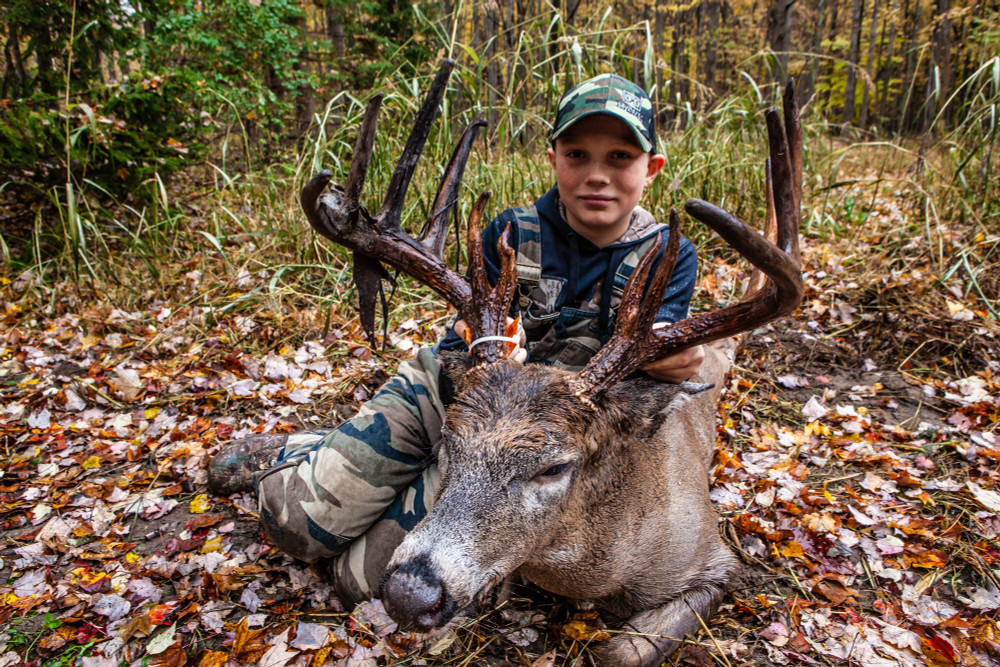 The following was written by 11 year old Wyatt Waterman of Caro, Michigan depicting his hunt on October 26, 2018.

The week of October 22, 2018 was one of the luckiest weeks I have ever had. It started off Thursday night at our last football game of the year. My team went against Cass City under the lights where we beat our arch rivals 28-8. I had 13 tackles and 2 sacks, and after the game my body ached. The next day was Friday, and we had no school! I decided to go hunting later that night, but little did I know I would shoot the biggest buck of my life. When I got out of the truck to go hunting my wind was perfect, blowing right behind me to the South East. It was beautiful out and at 4:30pm I saw a couple does. Shortly after the does left I caught movement and a button buck appeared. I sat still not to give away my position. My dad was in a treestand behind me, so I told him to sit still. We wanted to cover both directions. The button buck bedded down but decided to come back out during the last 30 minutes of daylight. Another 10 minutes passed and I heard something coming through the woods. I told my dad don't get out of the treestand yet because I had heard something. After a few minutes a huge body appeared and my feet began to shake. I noticed a big rack on top of the big bodied deer. At first I thought it was a big 8 point that we had on camera, so I stopped looking at the rack and focused on making my shot. Finally the buck presented a good shoot, "SMACK". I turned to my dad and told him, "That's a dead deer"! We got down and found blood, but the buck had went into a tall and thick grass field and we lost blood. With rain in the forecast my dad called Mike Riepen from Michigan Deer Track'n Hounds who showed up with his dog named June to track. After 30 minutes of tracking we came across a bed with blood in it. We kept tracking and eventually came up on the buck bedded in front of us 40 yards. With the buck alive, and it getting late we decided to back out and come back in the morning. The next day I was pumped to start tracking again. We found blood to start, but lost it shortly so we decided to split up. After looking for a while we met back up and my dad mentioned we should look down in the creek that ran through our property. When we got down to the creek I saw something brown, my heart started pumping. As I walked closer I realized it was my buck, dead in the creek. I yelled out, "DAD HE'S RIGHT HERE"! My dad was like Tarzan running through the jungle to get down to me. We celebrated for a while, took pics and eventually got the buck up out of the creek. This was a day and moment I'll never forget with my dad.